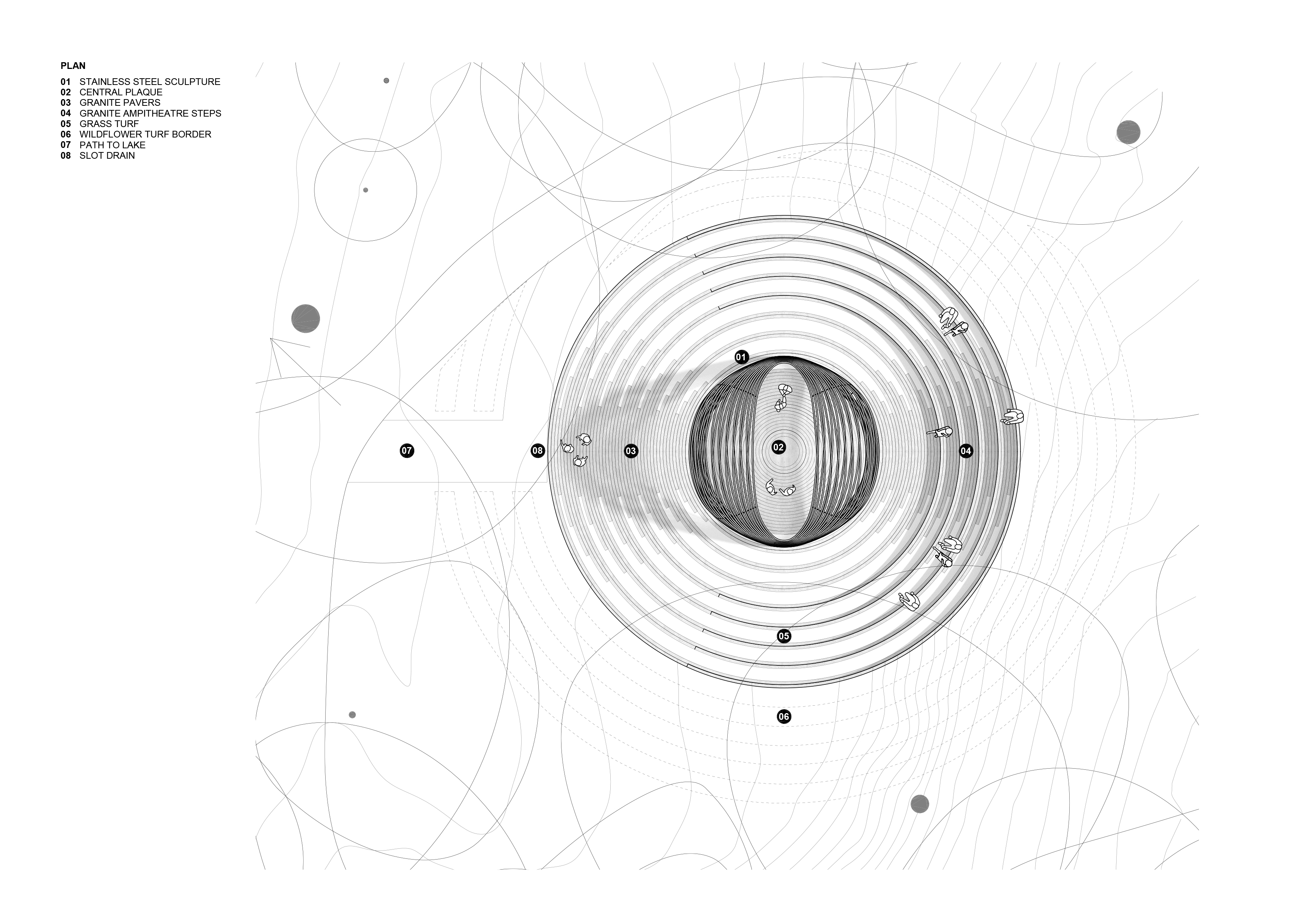 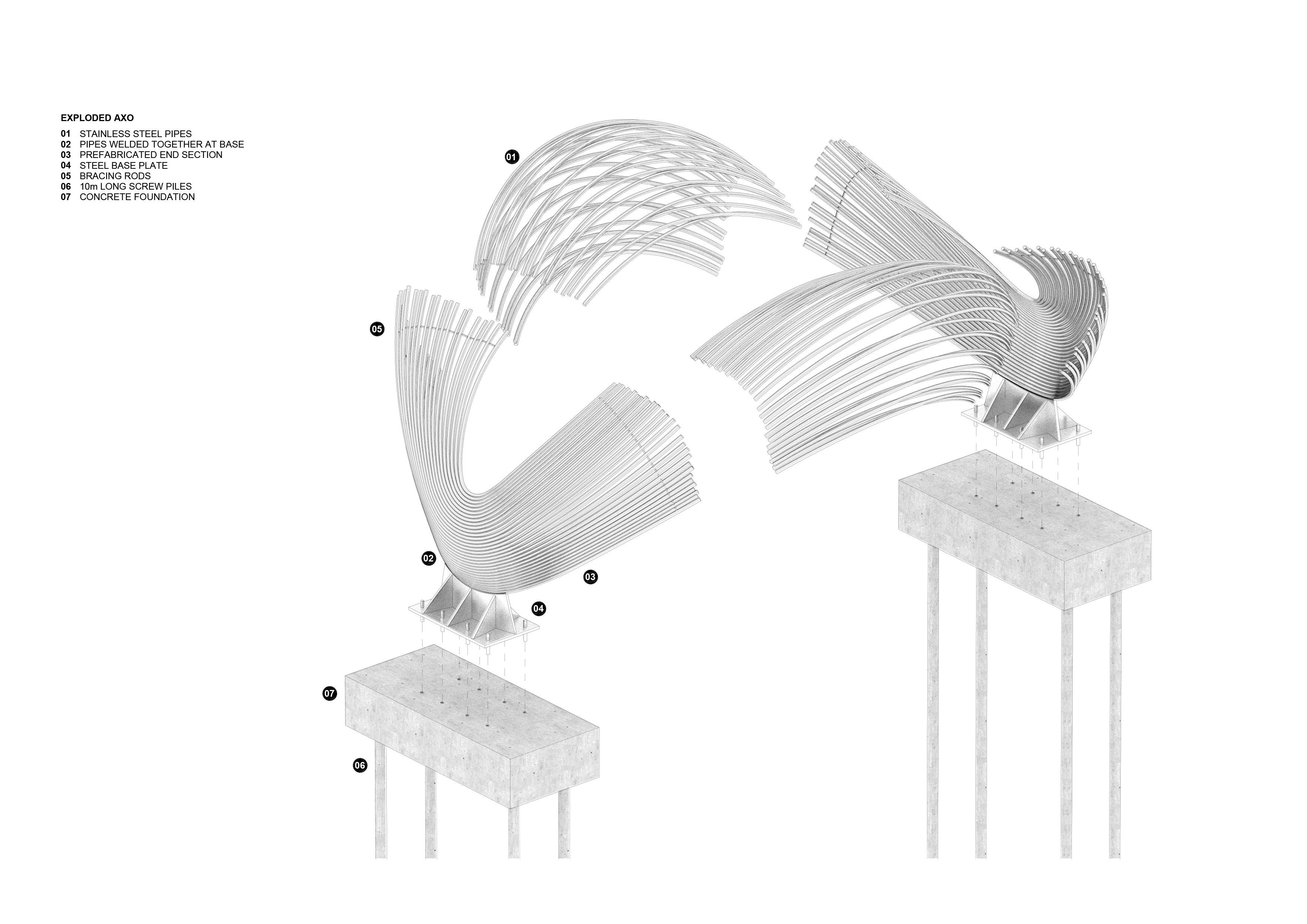 The Sousse and Bardo memorial is dedicated to the 31 British nationals who lost their lives and to all those affected by the two terrorist attacks in Tunisia in 2015. It is inspired by the fluid geometry of flowing water, frozen in place, as if time has stood still at the moment of the attacks. This has been chosen not only because of the proximity of the events in 2015 to the sea but also as it represents a symbol of the cycle of life.

Water, when frozen in time and examined closely is not formed from a single surface but instead consists of many individual streams, with their own ridges, ripples and paths but flowing together in a common direction. The centre piece of our memorial contains a sculpture titled ‘Infinite Wave’’ which recreates a single wave formed from 31 individual streams, one for each British national who lost their lives in the attacks. Each stream is formed from a graceful twisting and turning stainless steel tube. This material has been chosen for its reflective qualities which adds to the water like appearance of the form, creating a dynamic sculpture that reflects the trees, sunlight and natural landscape surrounding it. Each one of the streams is unique and has its own path but they all flow together to create a single form. The streams diverge in places, they twist and turn but always return. As visitors to the sculpture inspect the graceful, calm geometry of the sculpture they can trace the path of each stream, an act which reveals that the threads are not discrete individual elements but instead flow into each other. What at first appears to be 31 individual threads are all in fact part of a single much longer continuous thread, eventually looping back in on itself and beginning again. The form of the overall wave has been carefully designed to be appreciated from many angles. In plan it is a pure circular form, a symbol of continuity. When approached from the front the sculpture forms a simple arch which welcomes visitors inside. When viewed diagonally the form shifts to create the mathematical symbol of infinity, ∞. As visitors move further around to view the sculpture from the side the form shifts again to create a pair of wings, a symbol of peace and hope.

The landscape surrounding the sculpture continues the theme of water. It is conceived as a series of ripples that flow in concentric circles from the centre of the sculpture. The ripples represent the impact that the events in 2015 had beyond those that lost their lives. They represent the survivors, the families of the victims, the local communities, the national heartache and the global loss. They reflect how the impact of such tragic events is felt by an enormous number of people in many different locations.

The Sculpture was manufactured in three sections – two end sections that were fabricated and polished as a complete assembly and a middle section that was a series of individual polished  tubes that connected the ends – we used this method due to the physical size of the sculpture and the practicalities of delivery and installation.

It was a complex design due to the fact that there was not two tubes identical to each other. The Sculpture gives the general impression that it is symmetrical but due to the fact that all the tubes have to cross over each other in order to obtain one continuous tube from start to finish meant that each tube was unique.

There were over 250 individual pipes and 496 individual bends – each bend rolled and formed on two different axis, it was a challenge not only forming these but also identifying all the individual bends and ensuring they were positioned in the correct place.

The other challenges included maintaining the structural integrity of the fabrication, the need to transport and install the sections without causing any damage to the sculpture because of the irregular shape of each section, the positioning on site so that the middle sections fitted correctly and also the polishing of the sculpture both in the workshop and on site to a mirror finish.